Autograph Of The Week: Blake Martinez

Blake Martinez was a tackling machine long before the NY Giants picked him up in the last free agency. A lot of Packers fans said how much they would miss him which only made me even more excited.

It was a long time since the Giants had any linebackers to be excited about.

Then I was concerned a tad that the buildup would be more than the play I would see and luckily I was wrong. He had 140 tackles, 1 int and 3 sacks but him leadership impact also played a big role on a much different looking Giants defense in 2020.

I was looking through my collection and realized it lacked an autograph of Blake. 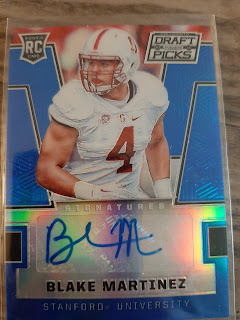 So $3 later, I had one.
I had to make sure it was in a Stanford uniform as I don't want cards in a Packers uniform for my Giants collection and that's all that Panini made for 2020 with a Giants symbol on them. That I don't like either.
With this seasons pickups and what they already had in place, I am very excited to see what Blake and the defense can do in 2021.
at April 23, 2021