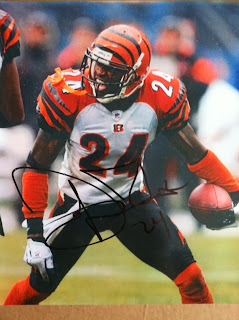 One big difference between Twitter and Facebook is the interaction opportunities that Twitter offers you. Yes, Facebook offers you interaction with your friends and family from near and far but what about those beyond that? Not a usual thing.
So on Twitter I follow athletes here and there. Most of the time ones that I am watching careers of, are on my team, or watched careers of at one time. But not once had they ever responded to my tweets and I figured that most of the accounts were fun by fans and not the actual athlete. That's until someone pointed out to me that the blue check-mark next to their name meant the account was legitimately them. So I began to follow a few more athletes and one that kept popping up was Deltha O'Neal. A player that I not only used to trade for in Madden, but a player I enjoyed watching. So I gave him a follow.
The first thing you learn right off about Deltha, is his love of the game. He also loves his fans and family. He tweets about those topics quite often. And will respond to fans who tweet back. And he also hosts contests for his former teams that he played on which is where I landed this beauty of a mail day from. In that particular contest you had to pick the winner and scores of each half of the Ravens/Bengals game. I was only a few points off so I turned out to be the winner. Was amazing to not only be followed by my first NFL player, but to get a package in the mail with their name on it. Was a cool experience. He not only gives away photos, I have seen others win footballs and game worn gloves. Incredible. If you have Twitter and have not followed him yet, do so. Especially if you are a big NFL fan.
A big thanks goes out to Deltha on this mail day and for the time he takes out for fans. For those of you who don't know who Deltha O'Neal is, he was a former NFL DB who played for the Broncos, Bengals, Patriots, and Texans (briefly). He had 386 tackles, 34 interceptions in his NFL career and was a two-time Pro Bowler with blaring speed and incredible ball skills.
As always, comments are welcomed!
at December 03, 2013