So for Christmas every year, I am allowed to give a list of what cards I want for Christmas. Out of that list a couple boxes would be chosen. I will break those down over the next few days to show you how we did.

The second box was a Absolute Memorabilia Blaster Box lot of 3 that was on sale dacardworld.com. 2011 is another strong rookie year with Cam Newton, Colin Kaepernick, Mark Ingram among others so taking a risk on a cheap blaster lot that guaranteed an auto or jersey card was no loss at all. 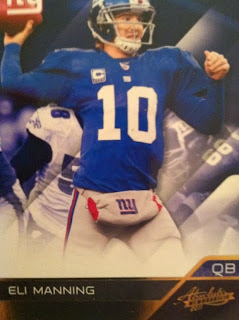 A clean design with not too much border. Very nice. 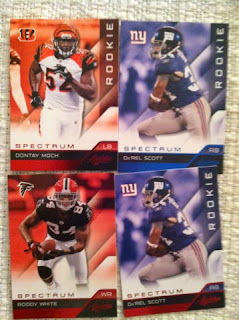 Spectrum Parallels. The Blue one is numbered to 100. 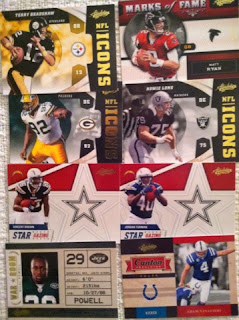 A good amount of inserts 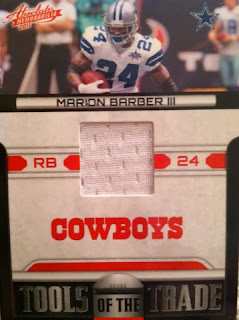 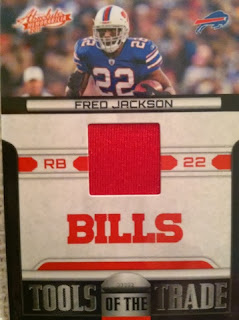 Blaster # 2 had this one. I really like the red. 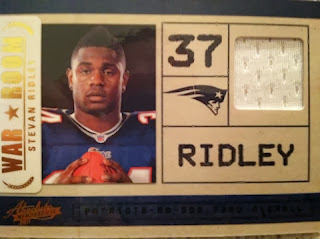 And the best hit of the blasters, despite being a Patriot
Overall, not a bad break. Got a base card set. Got some rookies. Three hits. And I believe the lot was the price of what one blaster would be so you can't argue with these results. I was hoping that an autograph would be found as one of the hits, but I also had a feeling that most of these are packed with jersey cards.
Must also note that I really like the design of the memorabilia cards. And that the Tools Of The Trade ones are both numbered.
Let's hear your thoughts on this break. And tomorrow will be an even better break!
at December 23, 2013