Enters to the front of the SCA (Sport Cards Anonymous) meeting.
"Hi, I'm Matt and I am a card collector."
"Hi Matt." Replies the group choir.
"Sometimes I gotta admit, I grow a little tired of seeing the same products over and over again and sometimes it's nice to see something a little new. You know, like the 90's! The good ole days of variety!"
But how do we find such products you may wonder? Well, you sometimes have to do a little looking.
My searching was handed to me on a silver platter by Twitter. I saw an interesting product when scrolling. A product that had some meaning behind it. A product I felt was an appropriate post for Martin Luther King Jr day that celebrates the civil rights activists life.
That product, 2020 Parkside NLBM Centennial Draft Class Set.
Parkside is a newer company that produces anime stickers, Major League Lacrosse, National Women's Soccer League, and something called Founder's Choice where they make a card of anyone they want. Wonder if it's time to see if they will make a series of blogger/hobby celebrity cards....I have tried with other companies for years.
The 2020 Parkside NLBM Centennial Draft Class Set celebrates Negro Leagues that were founded 100 years ago during a time when men were banned from competing based solely on the color of their skin. To honor them, they took fifteen men selected in the 2020 Major League Baseball draft placed them in appropriate Negro Leagues uniforms.
Let's take a look, 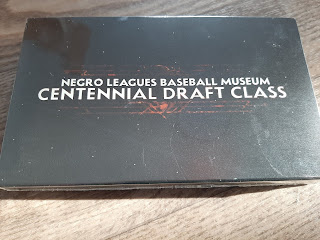 The outside of the box. Each set comes with 15 cards, a random autograph of one of the players and costs roughly $40. There are only 1500 sets produced.
What caught my eye immediately was the box they came in. Not the cover but the sides when I was about to open it.

The other end.
Rainbow foil with some writing and stats. 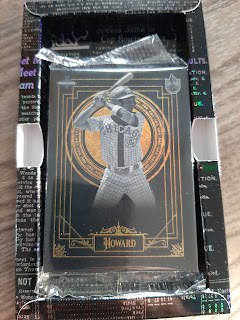 You slide open the box up and this is what you see first. 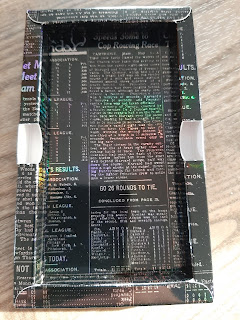 Underneath.
The writing is older newspaper articles of games played, stats and standings from a variety of sports including baseball. What a cool collectible in itself.
BASE: 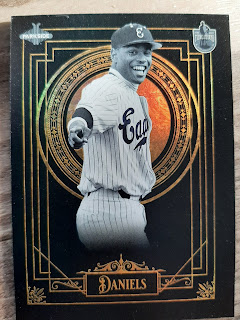 The base cards LOOK SPECTACULAR. This is professionally done and may be one of my favorite designs I had seen of 2020. The gold foil is also touched with rainbow foil which stands way out beautifully with the black background. The player is done in a black/white approach which also sets a nice tone for the overall base card. 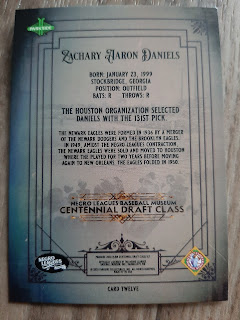 The Astros selected Daniels in the 4th round of the 2020 MLB Draft. This is card 12 in the 15 card set.
Here are the other cards in the set, 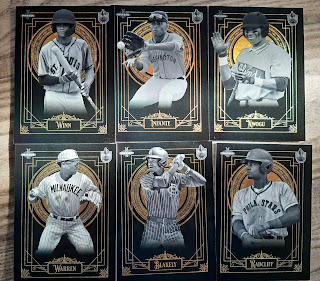 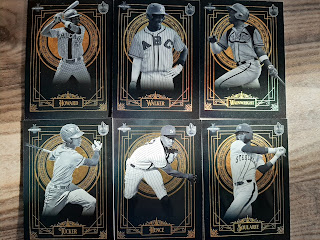 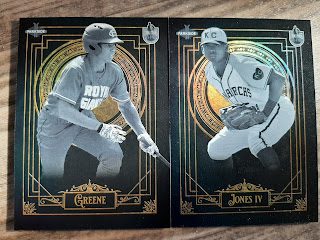 Before we get to the autograph, here is the list of names on the 15 card checklist,
HITS: 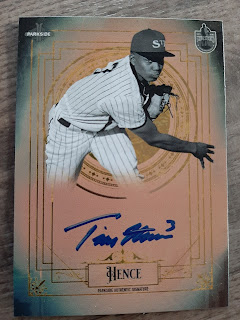 All autographs in this set are on card. My pull was Tink Hence of the STL Cardinals who was there second round draft pick.
This is a base/gold autograph but there are parallels to find as well, There are 69 Gold Signatures, 20 Silver Signatures, 10 Blue Signatures, and 1 Purple signature from each player.
FINAL THOUGHTS
Looking at the box alone was fun, but these cards overall look great. I can't tell you how great because the pictures can only show so much.
I can however suggest you grabbing your own set which you can snag one of HERE.
RATINGS BASED ON THIS BOX BREAK
Design ⭐⭐⭐⭐⭐
Inserts N/A
Parallels N/A
Hits ⭐⭐⭐⭐⭐
Value  ⭐⭐ ⭐
Fun Factor ⭐⭐⭐⭐
at January 18, 2021