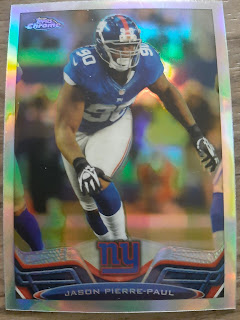 It's always hard to watch the NFL Playoffs when your team is not in, but I usually find a player or team I root on. A lot of the time these players or teams may have former Giants on them or are simply players I collect or enjoy to watch.

This year there is one team in each conference I am keeping my eye on.
In the NFC, Tampa Bay is slowly rolling through the playoffs and beat the Saints yesterday. Yes, they are led by one of the greatest QB's to ever play the game but my eyes are on Jason Pierre Paul.
Pierre Paul was drafted by the Giants in the first round of the 2010 NFL draft and played 7 seasons, won 1 Super Bowl and played in 2 Pro Bowls for them before they traded him in 2018 to the Bucs for a third round draft pick and a swap of 4th rounders. Seems like a loss for the Giants in that trade and was the beginning of their house cleaning and downward spiral. JPP had a big first year with the Bucs recording 12.5 sacks something the Giants could have definitely used with their lack of QB pressures until this year.
In the AFC, I am rooting on the Chiefs. Actually, I am rooting on the Chiefs to win it all. It would be okay to see JPP win another title but I don't think it would be to see Tom win another as he has enough. I am a big Patrick Mahomes fan but I also like the Chiefs defensive coordinator Spags as well.
Steve Spagnuolo, was hired in 2007 to be the Giants defensive coordinator by coach Tom Coughlin. The season started out tough for his schemes but once the players bought in, they bought in. He led that defense to beat the undefeated Patriots team in Super Bowl 42 in which he sacked Tom Brady so much Tom forgot what game he was in. A couple years later he earned a job as head coach of the STL Rams that didn't go well. He then bounced around different teams before returning to the Giants in 2015 where he led the Giants to one of their worst defensive outputs in team history before the 2016 turnaround where they ranked 10th in the league.
When the Giants began their house cleaning job in 2017, Spags was apart of it. He became the Chiefs defensive coordinator in 2019 and turned their defense into a Super Bowl winning one.
My hope this upcoming weekend will be that the Chiefs and Bucs prevail and set up a Super Bowl where I can just sit back and not care who wins.
As for the Giants, there seems to be some hope. They have a young nucleus, a good head coach and I feel just a few players away from a playoff spot.
Their biggest issue is not having enough offensive weapons with their two only bright spots being 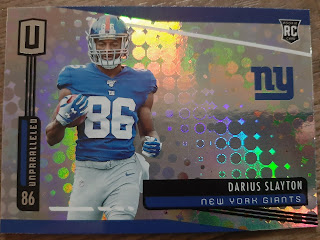 Darius Slayton who was drafted in the 5th round of the 2019 NFL Draft has put up decent numbers with 98 receptions for 1491 yards and 11 TD's in just two seasons. He also has a lot of chemistry with QB Daniel Jones. If he could have stayed healthy in 2020 those numbers could have been higher. 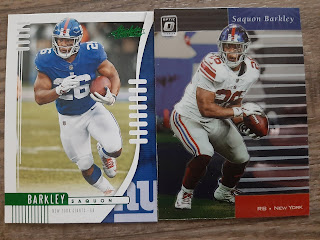 The other bright spot is Super Star RB Saquon Barkley who was drafted 2nd overall by the Giants in the 2018 NFL Draft. 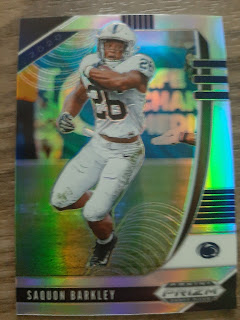 His rookie year was astounding and he was amazing to watch. He put up 1,307 rushing yards, 721 receiving yards and 15 total (11 rush, 4 rec) touchdowns. He looked unstoppable. 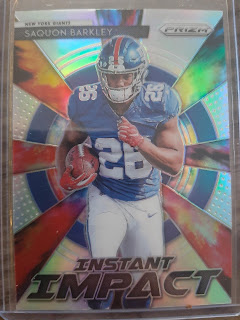 A high ankle sprain in 2019 lingered throughout the season but he still managed to put up another 1,000 yard season and had some impressive runs. 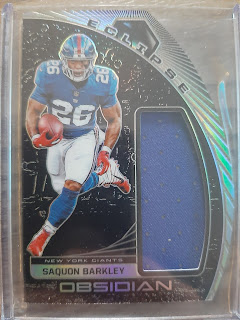 In 2020, Week 2 against the Chicago Bears he tore his ACL ending his season. He ended with 34 rushing yards on the season as it was a rough start to begin with. I think if he had stayed healthy, the Giants may have won a few more of those close games they lost later in the season when the offensive line started to gel.
I am looking forward to the 2021 NFL Season. I say this every year that I feel the Giants are a team on the rise but it took til this year to actually feel it. If they can build more offensive pieces around Jones to go along with these guys next year could finally be the take off year I have been waiting for. Maybe for once I will actually have my team to root for in the playoffs.
Thanks also to @CardpocalypseNC for this Giant mail day.
at January 19, 2021