In this NEW segment, I want to take a glance at a teams uniform when they change it and it's impact on cardboard. Some make a difference, some do not. Some team collectors have a preference, some do not. But I think a change of color/theme/design can sometimes either make or break a piece of cardboard that I collect or hold onto.

In today's versus battle, I want to take a look at the Tampa Bay Buccaneers uniform change.

Let's take a look at their uniform on cardboard back in 1995. On this type of card, the uniform isn't too bad because of the design. But, on most cardboard, there is just something about that creamscicle color that just didn't do it for me. 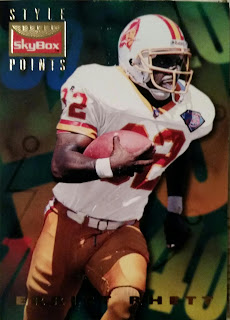 However, when they changed their uniform in 1997, I was impatiently waiting to find the first cardboard with it. My first card addition of their new uniform was a rookie card of Warrick Dunn from 1997 Topps Gallery that I even still have today!
The change of their uniform was such a turnaround from what they once were, that it started to draw me towards some of their cardboard. The logo is spectacular. The red and pewter blend perfectly together in harmony as you can see on this Vincent Jackson from 2013 Topps Magic, looks like magic. 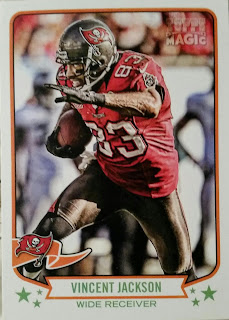 Now I am not a Buc's fan as I bleed Giants blue, but when it comes to cardboard, I don't mind picking myself up a nice looking Buccaneers card here and there. Some of their memorabilia cards are some of the best on the market.
What do you guys think, do you vote for the old Buc's uni or the new one and why?
at March 07, 2016