LET'S GET DANGEROUSly Close to Them All

I am the collector who buys in the night...I am that piece of corn that gets stuck in your tooth...I am Mattwing Duck!

I spent a good portion of my childhood watching Darkwing Duck, being Darkwing Duck on recess and in the classroom and playing with my Darkwing Duck figures. I also always used Darkwings catchphrases. Just ask some of the people who went to school with me.

I was the terror that flapped in the night.

In the past few years, the child inside of me or maybe it shows on the outside as well, has been wanting to claim back some of my youth by adding some of the figures I had when I was younger or even adding ones I always wanted but couldn't ever get. Pretty much the only thing cool about being an adult is being able to buy stuff. Other than that, you pretty much chug coffee, work all the time, keep ibuprofen and Icy Hot by your bedside, and get into political arguments on Facebook with "friends". Whoever thought being an adult would be so dull.

Back in 1991, Playmates released a series of 8 figures for the Emmy award winning kids program. I think they could have done many more, especially on the villain side as a couple of my favorites never had figures made. Where's my NegaDuck and Liquidator?!!?! Come on!

Growing up I had 5 of the 8 figures and played with them all of the time. But, as I grew up, toys became toys and they were left behind along with my other stuff at my parents house where they sold them all next to nothing. Something I wasn't very happy about as it was stuff I had hoped to hand down some day.

So I have spent the last couple of years trying hard to find deals on Darkwing toys to replace what was lost and the memories with them.

I so far have found four of the eight but added three more on a sweet deal recently. 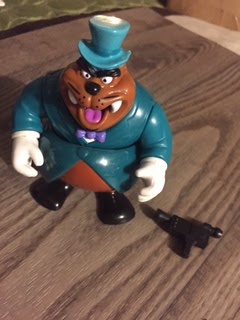 Tuskernini is a film director whose schemes are built around films and filmmaking. Lights, camera, CAPTURE! 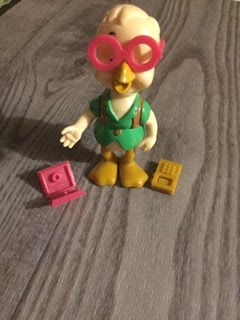 Honker Muddlefoot. The next door neighbors son and friend of Gosalyns. 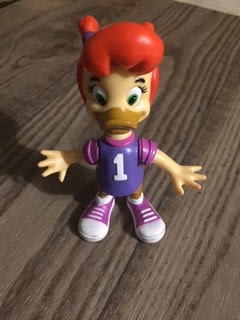 That drives me up to 7 out of 8 figures with only Steelbeak left to find. There's one on eBay for $30, but I prefer a cheaper one. So I will hold out.

Another cool thing about the figures I have is that they are almost all complete except Gosalyn and Launchpad who lack their accessories but can be found on eBay as well. The rest are complete.

Hopefully I can land the Steelbeak soon and his accessories as well to complete my Darkwing collection. I wouldn't also mind having some Funkos of them as well.

Then after that who knows which toys I will try to track down for my Childhood Toy PC. Batman The Animated Series? He-Man? TMNT? Toxic Crusader? Another? Only time will tell.
at February 18, 2020