So, so many of you complain about him, but when I hear him call a game, it brings me back to a glorious moment in my life.

The game that will forever be my favorite Super Bowl. David (Tyree) vs Goliath. The 18-0 Patriots who beat the Giants in the regular season finale to go undefeated, came into the Super Bowl just walking all over the people while the Giants found a way to the Big Game.

Then they found a way to win it.

With 1:15 left in the game, Giants down by 4 needing a touchdown and needing five yards on third down, Eli dropped back, avoids being sacked a few times, somehow stays on his feet and just whips the ball up there for the taken. There was multiple Patriots in the middle of the field and somehow, someway, some special teams WR named David Tyree jumped up in the middle of them, caught the ball, held the ball against him helmet with the great Rodney Harrison trying to pry it away and brought the ball safely down to the ground without dropping it.

I could play that over and over again in my mind.

Four plays later, Eli tossed up a beauty to a wide open Plaxico Burress for the Giants game winning touchdown. 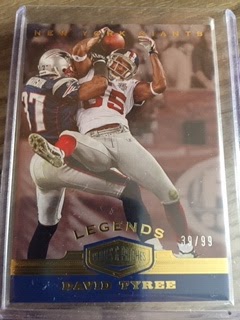 This years Plates and Patches product has a Legends subset card of David Tyree who made that heroic play that led to a Giants win (and of course the play is pictured on the card). There is a series of colored parallels that I have considered chasing along with this one.

It wasn't just the play that made that game memorable. Beating the hated Patriots and watching the game with my father which I hadn't done in over 20 years made that game one that I will always remember. Even when I get too old to remember anything else.

That game meant more to me than the one the same two teams played four years later. 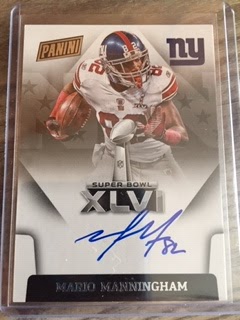 Where this guy, Mario Manningham, somehow kept his feet in-bounds by a fraction of an inch with two defenders around him for a gain of 38 yards in Super Bowl 46 that set up Giants momentum as they went for a Game Winning drive.I must also note the throw by Eli was superb. It was only where Manningham had a chance at it. Both catch and throw on that play was memorable.

The Manningham autograph to commemorate Super Bowl 46 is also in this years Plates and Patches product. Both cards were graciously sent to me by my friend Valley Of Cards unexpectedly.

Big thanks to him for these two additions to my Giants PC. If you haven't checked out him yet, please do so. He has some great stuff for sale at great prices on both his eBay shops and his website. Find them all here, website, eBay store 1 and eBay store 2.
at February 25, 2020