This weeks grabs were really random, just like my thoughts a lot of times, as these listings  just popped up and caught my attention like a pretty girl.

Let's see what my mind was thinking, 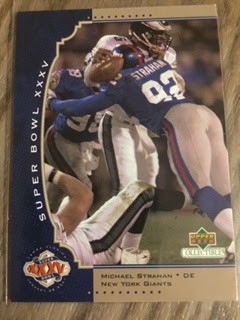 I posted the Kerry Collins pickup from this set already, but there are other Giants in this set and being a fan of Super Bowl sets, more about the ones when they win, I grabbed this one and 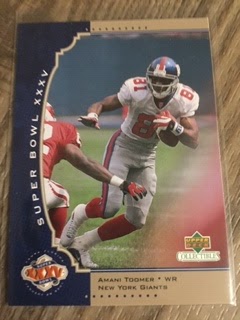 this one for a buck combined. Can't go wrong with that for the Giants PC. 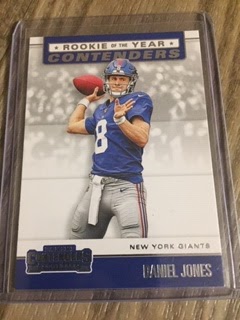 Daniel Jones is the future and I believe in him. Though at times I second guess myself because he is still so young and fresh and Eli was so reliable. But, looking at last season Jones had many bright spots and you could tell Eli's time was closing in the few times he played. I will just miss Eli as well. 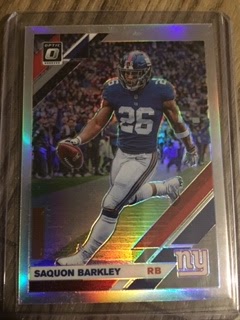 Saquon Barkley 2019 silver Optic. I was looking up Saquon cards ending soon and this one had .99 and no bids on it. Well, guess who won it with one bid and .99 cent. That's right, this guy. Saquon again proved to be unbelievable when he came back from injury and still pulled off a 1,000 yard season. I expect so much more next season when he is fully healthy.

I have noticed the last couple of years that Panini Prizm is the "It" factor for football rookie cards much like Topps Chrome was in the 90's. So you know what, I did some "prospecting" and grabbed a few players cheap before I couldn't grab them anymore. 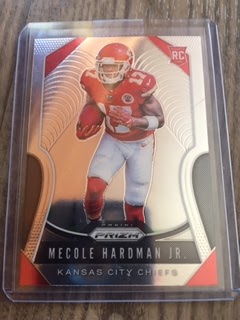 Mercole Hardman played really well in his first year with the Chiefs. He 538 receiving yards, and made the Pro Bowl as a returner with 871 yards. He also had 7 total touchdowns and got to  hoist the Lombardi. 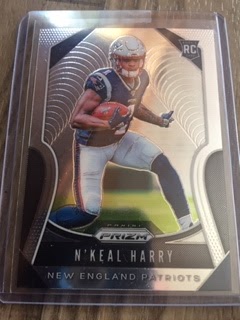 N'Keal Harry is going to eventually be Tom Brady's go-to guy and yes I say Tom returns to the Patriots next season. 6 foot 4 Harry didn't show much on the field last season, mostly because he was injured til November, but showed some signs when he was on the field. Better to grab him up now! 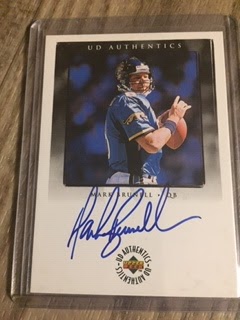 And my final pickup, I watched this Mark Brunell autograph on eBay because it was cheap to begin with. But, when I landed it for $1.75 with an offer I made and $3.99 shipping, it was an absolute yes. It fits both my 90's PC and my Mark Brunell one.

All of these were picked up for less than $15, so you can tell I was bargain hunting and bargain winning.

That left me with $10 leftover this week.  Sometimes you just don't spend it all and isn't always bad thing.
at February 22, 2020