With the 6th pick in the 2019 NFL Draft...the NY Giants select....Daniel Jones, Duke University. Giants fans threw up after hearing that and I wasn't sure where I stood. I don't know a lot about the players before the draft besides what I hear and what I see. That's the only judgement I got. I don't watch College football as it bores me.

So for me, I was on the fence, but I was in full support of Daniel and wished him only the best. I mean who wants to root against the future of your favorite team? You can't be a real fan then.

Daniel surprised many when he took over for Eli Manning in Week 3 and pulled the Giants back from a 18 point comeback against Tampa Bay in that game and ran in for the game clinching TD on 4th down. Something Eli Manning never did. He followed that up with another win a week later against Washington. After that, some rookie struggles came and the Giants continued to lose but mainly because of the defense, not Jones. Jones got hurt against Green Bay and missed a couple of games as well. But, one game was a great one when Eli Manning got to take over and get his well deserved standing ovation good bye win at home vs Miami.

Jones broke many NY Giants rookie records and had multiple 3 TD+ games including 5 against the Redskins in the game before the season finale. Jones finished with 3,027 yards 24 TD's and only 12 ints. For a rookie, that's really good. However, whats missing is the glaring amount of fumbles he lost this season. He had 18 fumbles and lost 11 of those for turnovers. Now, not all of that was his fault. A good LT would have helped and a coach that could have taught him how to tuck and run would have been great as well. I think he will improve upon that in 2020 season as long as the Giants fix the line and get a great coach.

I was impressed on how well I landed Daniel Jones in trades in 2019 and even some I purchased for $15 early on. I barely have any Saquon hits and autographs, but it seems Jones just fell to me. Which is fine to me! Looking back at my Eli rookie year PC, it is awful. At least if Jones becomes who I think he will be, I won't need to worry about adding any more down the road.

Take a gander at my best cards here, 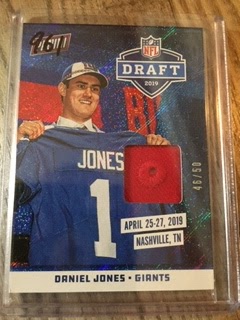 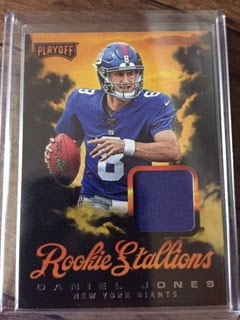 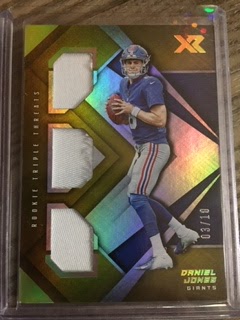 Nice patch card given to me by a buddy 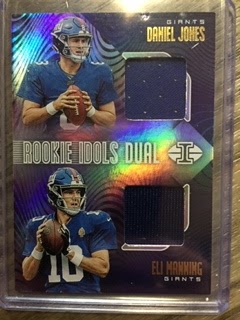 I have two of these, wished I could afford a dual auto of them 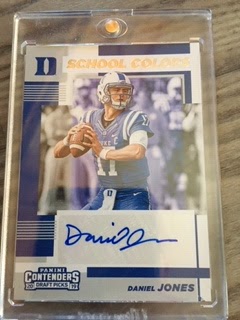 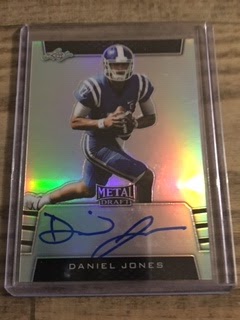 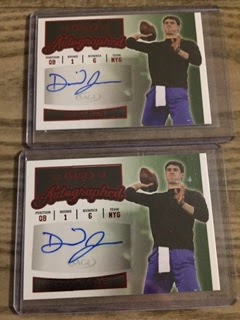 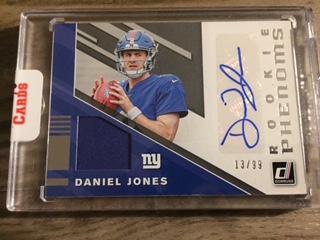 Valley Of Cards sent me this, won't ever forget it 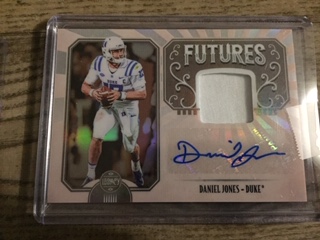 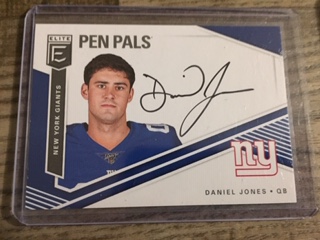 Traded for this one early 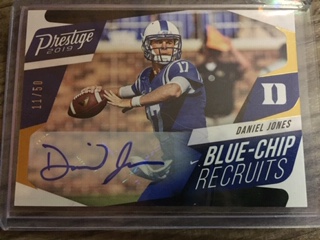 Given to me as a gift from a friend, same one who gave me the /10 patch above 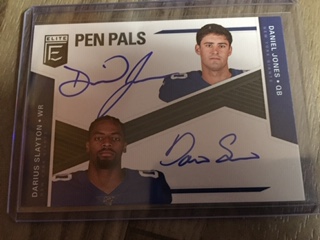 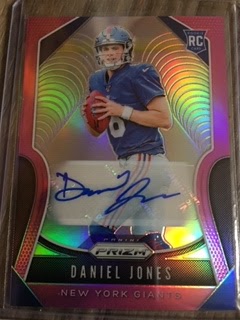 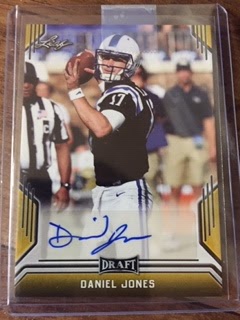 this one was really cheap add as well 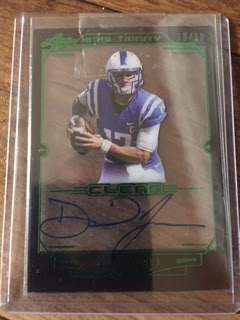 I have accumulated 13 Daniel Jones autographs overall and feel like I should be done trying to add him, but also feel I am not done. All I can hope is that he turns out to be the next Patrick Mahomes or Lamar Jackson and not the next Jamarcus or Ryan Leaf.

Once again, I am not prospecting Jones, he is my teams QB. Which makes the investing scenario a little different than most. I am investing that he is the teams next true QB and will lead them to the playoffs and beyond down the road. That's my real investment.
at February 18, 2020