The Voice Of My Childhood

There were too many great shows and cartoons I watched growing up to list on here, but a lot of them had a common theme.

Jim Cummings is a voice actor who started in career in the mid 80's. He voiced many iconic characters such as Pete from Goofy, Winnie The Pooh, Tigger, Monterey Jack,Don Karnage,Dr. Robotnik,among many, many others in both film and television.

Among all of those characters, one I didn't mention as I was saving it for the main part of this post, was that Jim voiced Darkwing Duck.

DARKWING DUCK. THE TERROR THAT FLAPPED IN THE NIGHT. My childhood hero of sorts.

Recently, I saw a 8x10 Darkwing Duck signed photo by Jim on eBay and really wanted it. The problem I had with it was there wasn't any real certification so I passed. Then I looked up other Darkwing photos and came to see that Jim's autograph wasn't cheap, at least in Darkwing form.

That's when I did a generic search for his autograph and found out he was in Topps Journey To Star Wars:The Last Jedi product and for $10 I couldn't pass it up. It was worth it for the memories alone. 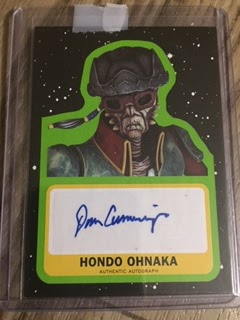 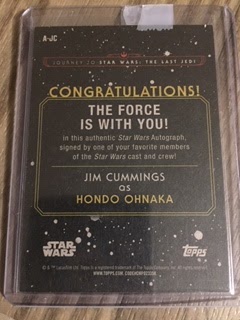 Actual certification that it's real
Jim still does a lot of voices today. Ranging from OK K.O.! Let's Be Heroes to
Mickey and the Roadster Racers to Apple & Onion and even a short 4-episode stint on the newer Ducktales reviving his role as Darkwing Duck.
It's fun knowing a lot of this generation will get to remember Jim voicing a lot of their childhood as well. Maybe not as much as he did when I was younger, but he's still out there and you just never know when his voice will pop up in a movie or cartoon.
at February 19, 2020