The Origins Of A Cardboard Addict:Good Burger

To be back in 1997 again...that would be amazing. I was at my prime age of 14 where I was full of energy and fun and now I get tired putting groceries away with back pain, on a few Blood Pressure meds, and simply can't remember like I used to at the age of 37. Hate to see what over 40 is going to look like.

One time he had bought a new lawn darts set. These things were pretty sharp and long and we played cops and robbers with them. He was the cop, I was of course the robber running away from him as he threw them at me. When one went deep into my calf, we called it a day.

Another time in the winter, he dug a hole in the deep snow, told me to lie down in it while he put a sled casket over the top of me and buried me deep in snow where I couldn't breathe and began to hyperventilate. I guess I was lucky he let me out.

Another time he set up a "mine field" in the woods full of traps that I had to crossover to get to the other side. That was a painful day.

Then there was the time I tried Mountain Dew and frosting together, a story I told on here before.

So when he invited me over to watch a movie with him, I began to be a little skeptical. Especially after the last time he invited me over for a "movie" he ended up finding his uncle's stash of well...adult type movies. I was a bit scarred and noticed it wasn't stuff they taught you in school when you learned about the birds and the bees.

For some reason or another, I still agreed to go over to his house. So I took the walk and knocked on the door to be greeted by his aunt who had come over and brought some snacks and a couple of movies for us to watch. Phew. At least she didn't find her husbands stash....or maybe in the long run it was hers... or theirs...ugh..gross...all done with that topic.

One of the two movies she brought over caught my eye with Good Burger.

I had never seen a preview, didn't know it was a sketch on All That since I didn't have cable TV (later on I started to watch All That on my grandmother's TV when I visited her) but saw that is was a Nickelodeon film so knew it was safe to watch and that it would probably have some kind of crude humor which was up my alley.

So we sat there and watched the movie. I had a great time and actually watched it again later that evening since I enjoyed it so much the first time. It began to make it into my rotation of movies to watch every few years and that still continues today as an adult.

If you haven't seen Good Burger, the synopsis of the film is a slacker high school student Dexter Reed takes his mother's car on a joyride while she is away and crashes into his teacher trying to avoid a kid on roller skates. He was in some deep doo doo with having no license and not letting his mother know he damaged the teacher's car, so he had to get a job at a local burger joint, Good Burger, to help pay for the damages.

While he works there, he becomes friends with a dimwit named Ed and their friendship grows throughout the movie while a rival burger joint Mondo Burger comes into play to be the main burger place in town with all of its giant sized burgers and flashy lights. That's until Ed creates a secret sauce that starts taking away Mondo Burger's customers and that's as much as I am saying.

I suggest you watching the film for yourself. I won't spoil any more secrets or the fun parts of the movie. I should also toss in the film has some pretty big names in it such as, Keenan and Kel, Shaq, Sinbad, and Carmen Electra just to name a few. Maybe Carmen alone would get you to watch the film.

I am still hoping the rumored sequel will happen, but until then, just going to watch the new All That series and see the once-in-awhile guest appearance of Ed at Good Burger.

Why am I going on and on about this movie, well, Greg from Nine Pockets made a custom card for the movie I was pretty stoked to see it. I was even more so after he said he had mailed me a sample of the card. 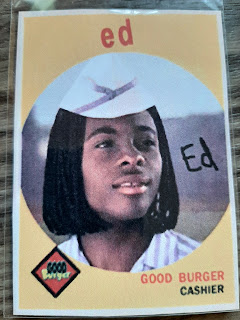 The 1959 Topps design gives Good Burger the perfect look and a great card for my non sport PC. I hope Greg does a series of cards of the cast from the movie. That would be a lot of fun.

Thanks to Greg for this trip down memory lane.  Well, except the memory of his uncle's secret movie stash. I saw things my eyes will never un-see again.

I am thinking a good watching a Good Burger today will help with that.