It Was Ruined For Me 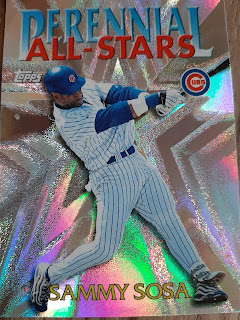 The 1998 MLB season was one that was memorable and amazing to watch...but those memories went down the drain just a few years later, at least for me.

The home run chase between Sammy Sosa and Mark McGwire to beat Roger Maris' record of 61 home runs in a single season had me hooked and lured in that summer. I was really rooting on Ken Griffey Jr to surpass them and take that crown just because I am a collector/fan of him but it didn't take away from the thought of all of this going down.

Despite Griffey's best efforts, there was no way he could catch up to the power that Sosa and McGwire provided as it felt they blasted a home run every other game. I remember watching the news and having the sports anchor break down how many home runs would need to be hit over a certain amount of games left for all three players to break the record.

That season, both players crushed Maris' record of 61 as Sosa hit 66 and McGwire smashed his way to 70 that year. I couldn't believe what I was seeing and it was exciting. It made me fall more madly in love with the sport and baseball cards.

Then came the steroid controversy.

Finding out that both players cheated the game to break that record, which was later on beat again by another steroid accused user in Bonds, made me really start to question my love of the sport. Then came more and more accusations of other players including Roger Clemens who was my favorite pitcher at the time. It completely turned my world upside down for baseball. I started to push myself away from the sport and it's cards.

By 2005, I was no longer a die hard watching/Yankee rooting baseball fan and instead NFL football was the only sport I continued to watch. Baseball cards became less interesting especially after seeing the values fall on McGwire and Sosa after I had finally acquired their rookie cards and a few other short printed cards.

Fast forward 15 years later, I can say I didn't watch one single MLB game this year which is a surprise as I at least used to use it for background noise the last few years sorting cards when the Yankees were on ESPN. What am I saying...when aren't the Yankees on it?!

Though my passion of baseball cards isn't what it once was, I still continue to add to my collection when I can with Griffeys, Judges, Gleybers and key rookie cards. But, what I really like to collect of the sport is cards from the late 90's and early 2000's which to me is the best time frame of collecting in the history of collecting.

When @pdawson224 had two shiny cards from that time frame up for grabs, coincidentally Sosa and McGwire, I quickly snagged them and Patty mailed them out not much longer after. This claim was apart of the no longer running #PWEFriday. All it takes is a few bad apples to ruin a good thing. 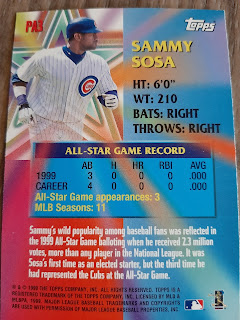 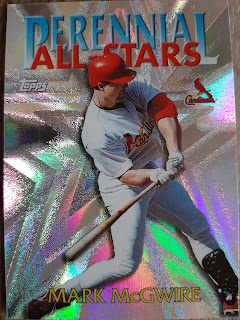 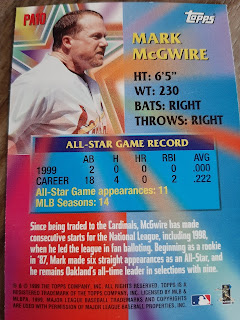 The design is spectacular and makes me wonder why Topps cannot produce great looking inserts like these anymore. Add some flash and excitement!! Most inserts now are produced to look like base and they don't excite me like this.

Despite what happened in 1998 and all through the 90's with the Steroid Era, I am just glad my most favorite player during that era had no ties with the roids. Thank you Ken Griffey Jr. True class Hall Of Famer and who I consider now the leader of the 1998 Home Run chase.

I know there are at least a lot of McGwire fans, not sure about Slammin' Sammy, out there who will shake their heads at me and probably leave comments about it but it's simply how I feel. I have tried to take in account that the Roids just gave them the power to hit which doesn't help swinging at a 95MPH fastball but it still bothers me. I am sure other sports have their cheaters as well, looking at you Tom Brady, but this baseball incident hurt the worst.

So what do you guys think about the 1998 Home Run chase? Are you okay with them using roids for it? Does it bother you at all? Let me know in comments!