I Caught A Trout

The greatest player in baseball right now made an appearance in my mail box this week and I couldn't have been happier about finding him in there..

Mike Trout has been hitting the baseball like it's a tennis ball since July and continues to prove to us he is the best there is in the game today.

This season so far he has hit 41 HR's with a .298 batting avg and 96 RBI. Once again also looking like he will win yet another MVP award. Not to mention he is an MVP to fans as well as I have heard and seen on Twitter he signs for them before games, which you can't get a lot of super star caliber players to do.

His dominance reminds me a lot of the player his numbers are being compared to in my boy, Ken Griffey Jr. The only big difference between the two is Griffey's sweet swing. You can't teach that. But, Mike could chase down some of those Griffey records and numbers pretty quickly as he is on pace to do so already and is only 28 years old keep in mind.

Recently, @LaVidaBaseball broke a 2019 Topps Lindor and were giving away the cards they pulled inside. There were many big names I entered to win, but I got the one I wanted most, 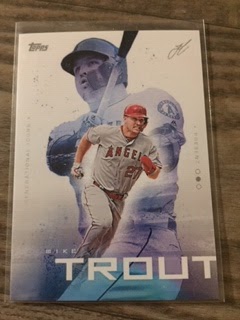 The design is vaguely similar to Topps Bunt. I like the offsetting colors and even the bigger last name font that offsets the small first name. 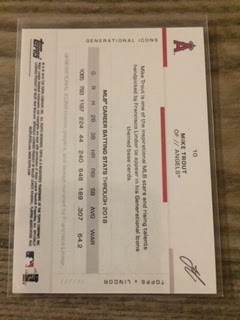 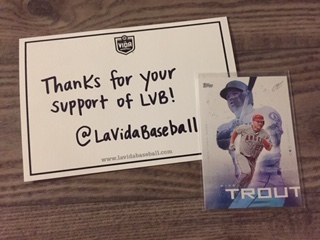 The only thing I worry about Mike is the fact he plays for the Angels who don't really seem to be going up anytime soon. Just would hate for him to have a ringless career like Griffey who I always wanted to see in pinstripes, well, I want to see Mike in those too. Who wouldn't want him on their team?