The Origins Of A Cardboard Addict:Mighty Morphin Power Rangers Part 6

In 1995, one of the biggest movies that summer was about to come out.  That movie, Mighty Morphin Power Rangers The Movie!! Say what?!

My parents never ever went to the theaters so I had no idea what that experience was like. We always rented VHS tapes from the local video store so I always got to see the movies way after everyone else. Same was the case for this one.

Everyone knew how bad I wanted to see it. They knew all about my passion for everything Mighty and Morphin but yet I had to be the last to see it between myself and friends. But, I did get to see it when it released on video and it was awesome.

I am so glad I did get to view it before the new season of Power Rangers came on Fox because the new season was based off from how the movie ended so I would have been lost.

There were some minor changes to the story lines, but at least they didn't touch the star of the series and the movie in the White Ranger Tommy.

You see, in Season 2, after Tommy lost his Green Ranger powers which I spoke about in Part 5 of this series, Lord Zedd sent powerful monsters to earth who easily took down the Power Rangers which led Zordon and Alpha to try and find a way to bring in a new Ranger to help alongside. The other five Rangers didn't like the idea since Tommy used to be apart of their team and was irreplaceable, but were pleasantly surprised when the White Ranger walked into the room and took off his helmet revealing Tommy. He became the White Ranger that was created from the powers of the Light Of Goodness. The Light Of Goodness powers could never be stolen by the forces of evil like his green ones were.

Tommy was also installed as the leader of the Rangers and had a costume unlike the others. It included a black and golden shield armor as well as golden bands instead of the diamond shapes on the gloves and chest and the mouthpiece on his helmet lacks sculpted lips. He could summon the Tigerzord with his talking saber Saba. So an already cool Ranger became even cooler.

As for the Power Rangers movie itself, a new villain comes into play in Ivan Ooze. He was released from an egg that he had been trapped in for 6,000 years by Zordon. He then comes out, locks up Zedd and Rita in a snow globe and takes down Zordon and the command center. Then uses ooze to hypnotize people of Angel Grove to adults to unbury his evil Ecto-Morphicon Titans that were war machines he had built before his demise.

In the meantime, the Rangers knew their powers were drained and knew they had to save Zordon before it was too late. Robot assistant Alpha 5 sends the Rangers to the distant planet Phaedos to obtain the Great Power and save Zordon and the world.

Ooze finds out that the Rangers were after the great power and sends his Tengu warriors, giant birds, to destroy the Rangers. Luckily for them they were saved by an old friend of Zordon's named Dulcea who was warrior of the planet. The Rangers explained to her the situation and she helps take them to the ancient ruined temple acquire the power of the Ninjetti. Dulcea awakens each Ranger's animal spirit and the Rangers made their way to retrieve the Great Power.

I won't dive any deeper into the film and let you watch it for yourself. 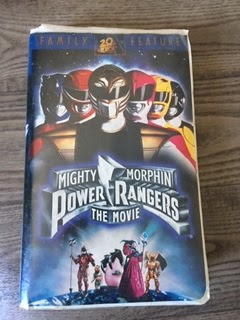 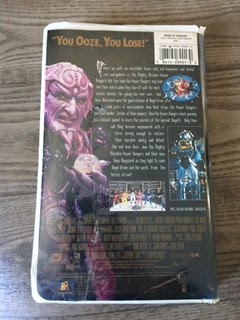 I may watch it today myself. I finally as an adult was able to acquire a VHS version of the movie after my local video store sold off their stuff after they went out of business. I still need the DVD version.

One of the things I really wanted after the movie released in 1995 was a White Ranger figure. Well, I technically wanted one before the movie but was never able to talk my parents into getting one.....until they finally did for one Christmas. 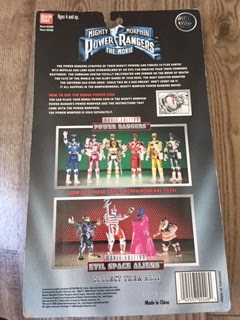 The one problem was, they got it from the Mighty Morphin Power Rangers The Movie figure line where Tommy's white suit had been turned silver. It worked for my purposes of playing, but wasn't quite what I wanted. I had a big imagination so I made it work.

Once again years ago, I sold off all of my figures regrettably and have been slowly adding pieces back to my collection one by one that I once had. And again, Thanks to @Jake1725, I was not only able to find a sealed figure of the one I had in my youth but a STINKIN SIGNED VERSION. Yes signed. Signed by Tommy himself, Jason David Frank! 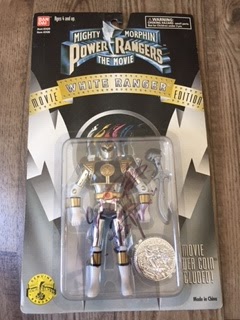 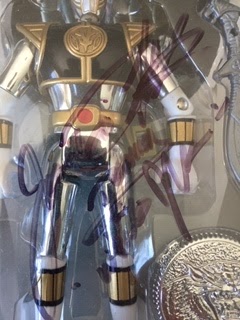 Yeah, check out that sickness! Each figure also came with a power coin of the Ranger and a weapon which for Tommy was the Saba.

I don't know where they guy Jake got it from had it signed, but I can only assume a Comic Con type of thing. Either way, it is a really awesome piece that I need to find a way to store without the ink fading.

Huge thanks to Jake for helping me land this piece as well. This was like a childhood dream coming true.

This does it for toy show offs for my Power Rangers until I can land more pieces I want. However, there will be one more Origins story related to the White Ranger and Power Rangers that taught me a valuable lesson in life. That's for another day though.

I hope everyone enjoyed seeing my new pieces to my collection and comments are welcomed on this trip back in time.
at August 27, 2019