The Origins Of A Cardboard Addict:Closing Time Part 1

Closing time
Time for you to go out go out into the world.

1999 was a different kind of year in the hobby for me.

I was going into my sophomore year of High School and some of my focus wasn't on cardboard anymore, it was increasingly on girls. The only problem I had was, cards were so much easier to acquire than a girl. You see, I wasn't the ladies man. I wasn't the QB of the football team. I was an awkward Batman loving, cardboard collecting, toy playing geek without the glasses and some of the weirdness. It was not an ideal situation for girls.

The other part of that is I set my goals way too high for them. I didn't want an equal partner, I felt I could go into the higher class of them at the high school. The girls who would date the QB of the football team. So you combine all of that and you had a single guy who had never had a girlfriend.

At least I had other things to fall upon when I was feeling down about that. Like my favorite football line back in the 90's, Topps Chrome.

I recently found a pack for $1.99 and couldn't turn that down. This would mark me opening one pack from each year of 90's Topps Chrome football products. Baseball is next at some point. 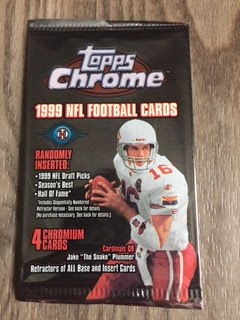 Here was the front of the pack of Topps Chrome for 1999. Once again, a bit of a gamble back then as prices were higher than the $1.99 I paid and you relied on four cards to get you there. But, with a rookie class that had Donovan McNabb and Ricky Williams, you were hopeful. 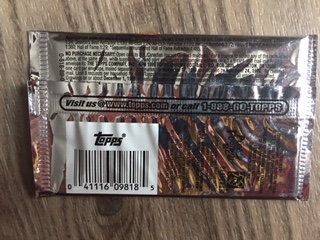 Back of the pack with the odds listed.

And here is what I pulled: 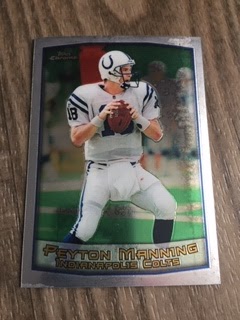 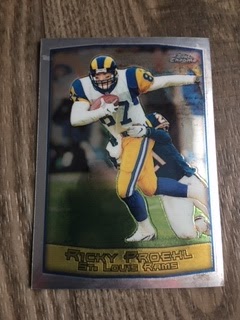 Rickey Proehl base. Remember how big of a role he would play for the Rams? 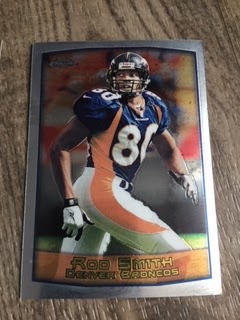 Rod Smith who was a beast for the Broncos 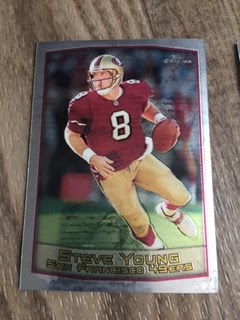 And Steve Young who was fun to watch. Was my second favorite lefty to watch besides Mark Brunell.

Not a terrible rip, but no rookies and no refractors this time to brag about. I think I did pull a few rookies back in 1999, but I didn't get to bust much of it as my time was spent like I said trying to get a girl.

And try did I ever.

And failed every time.

I wasn't sure what would happen to me as my years of high school went on. Was I finally going to land a girl? Would card collecting continue to play a big role in my life? Would I ever grow up? Would/Could I add to my friend circle? The first two years of high school weren't easy for me and all I could hope is that the final two would be. Life was coming at me fast and I didn't know which direction to go. Just was hoping I would figure it out soon.