The Origins Of A Cardboard Addict: Closing Time Part 2

In the fall, I joined the varsity football team hoping to make an impact. I had switched my position from being on the oline to finally being able to show off my hands at Tight End. However, the coaches went with their "favorite" once again to start and I was left on the bench to rot. Even though I felt I was a better player between us.

As fall moved on, I started breaking out of my shell some and started being more of the class clown I was in graded school. Others started to take notice. Including a girl who began giving me hugs once a day which built up over month before she finally became my girlfriend. My first one! And I was going to do everything in my power to keep her. So I gave up a lot of my "fun things".

I sacrificed my true friends to spend all my time with her. I put my toys away. I moved out of my parents house and split my card collection up with my father. I tossed away old papers (a ton of writing pieces I had done in my youth) that had meaning to me from graded school so I had room to move in with her family. I also gave up card collecting as she wasn't a fan.

At about the same time in the MLB off season, my favorite player Ken Griffey Jr, had been traded to the Cincinnati Reds for a bunch of players that would never equaled his greatness. He also signed a long term contract with the Reds as well.

The only problem, I had the girl now.

How was all of this supposed to work now? Everything was changing in my life and it was coming even faster at me than before. Growing up was more of a challenge then it was led on to be.

Luckily, my father wasn't too mad about me leaving home and was able to snag me a couple of the hottest Griffey cards in Beckett at the time. 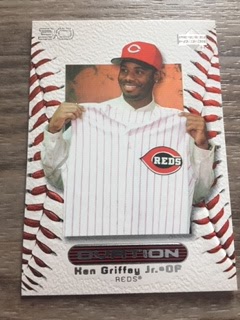 The first was this Upper Deck Ovation 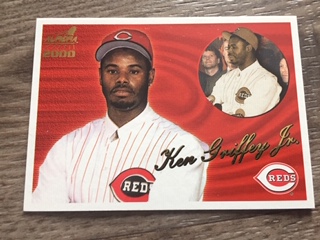 the second was this Aurora

Both served as his first two true Cincy Reds cards and I believe they were number one cards in the Beckett back then upon their release. 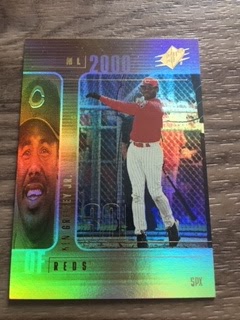 Much longer after that the Spx version came out and he was nice enough to grab me that one as well. Of course all three had to be snuck to me so the girl wouldn't see. But, at least I had them and still do.

As my relationship with the girl grew longer, the other parts of my life grew shorter. I became very distant from everything I had once known to growing closer to everything new. Would this be a good decision in my life? Was I even happy after I finally got what I thought I wanted?

Closing Time was coming and I knew it. But, how long and how would I handle it. That's a story for another day.
at December 30, 2019