I can make a list of every Panini product out there and rank my favorite ones and where they fall.
I can say without a doubt that Panini Prizm is my number one but falling not too far right behind that one is Panini Contenders.
Every year I try my best to add some of the rookie autographs to my collection but have never had much success with box breaks of the product. If this was a game of Never Have I Ever mine would be Never Have I Ever pulled a top rookie autograph from Contenders.
Would this stay true for this box? Lets see... 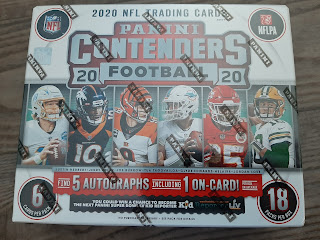 Every box of 2020 Contenders football comes with 18 packs of 6 cards.Each box comes with 5 autographs and one of those autographs are on-card. Boxes are close to $600. Yup, that's not a mistype.
BASE: 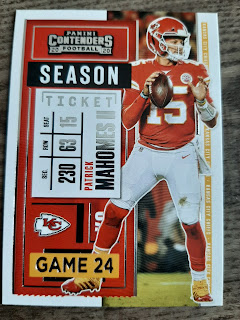 The base set checklist is made up of 100 cards and is done ticket style design like it has been since 1998. There are no legends or rookies in the base card set.
PARALLELS: 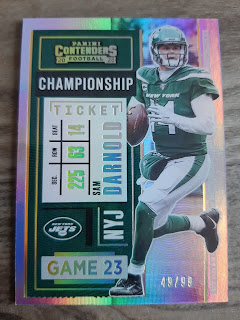 Each box comes with one parallel. Mine was a Championship Ticket /99 of Sam Darnold.
Other parallels are,Red Zone FOTL, Stardust, Playoff /199, Championship /99, Cracked Ice /22, Super Bowl 1/1, and Printing Plates 1/1.
INSERTS:
The inserts have parallels and those include, Emerald, Orange, Ruby, Sapphire, Silver /149, Gold /49, and Platinum #/25. 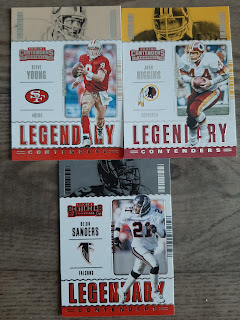 Legendary Contenders has well Legends. There are 15 cards to collect in this set. 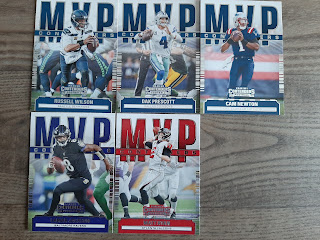 MVP Contenders is made up of 25 cards of the best players in the game. 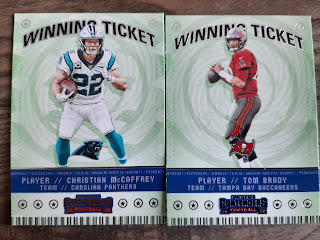 10 cards in the Winning Ticket set. 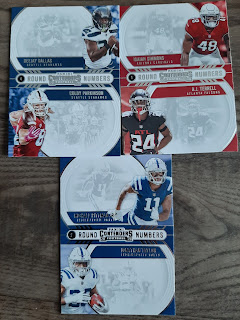 Round Numbers has 20 cards combining top rookies and their draft round. 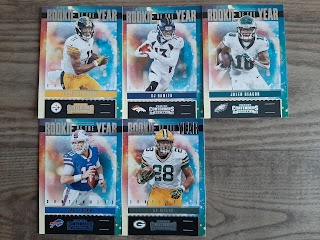 Rookie Of The Year comes with 30 cards.
HITS:
Now don't expect a Burrow or Herbert in every box or any box that I open. What makes Contenders fun is the rookies and especially rookie autographs you won't find in other boxes. It can sometimes lead to a gold dig. 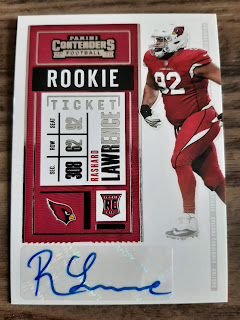 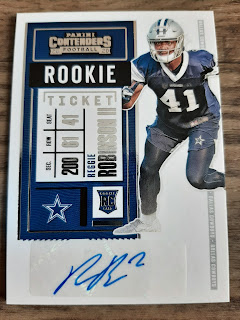 Reggie Robinson II
First two autos I have no idea who they are. 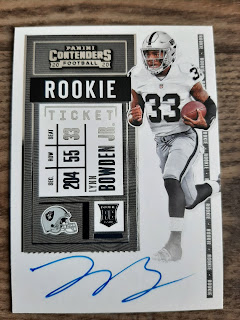 My on-card auto was of Lynn Bowden Jr. This is also a ticket variation. Notice the helmet on the front instead of the team logo. 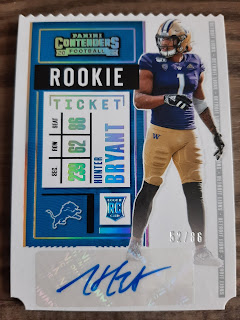 Lions may need to use this guy more next season, Hunter Bryant. This is a Stub parallel.
Other Rookie Ticket autograph parallels include,
TICKET PARALLELS: Wild Card, Red Zone FOTL, Playoff \/99, Stub /99 or less, Championship /49, Cracked Ice /22, Super Bowl 1/1, and Printing Plates 1/1.
CLEAR TICKET PARALLELS: Mosaic, Clear /10.
And my final hit was the biggest of the box... 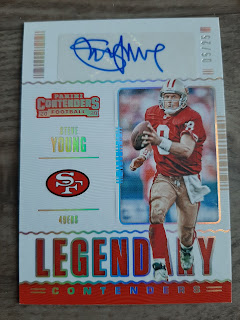 Legendary Contenders autograph of Steve Young!
FINAL THOUGHTS
Well....for $600...this was rough. I think its safe to say a better way to get into a product like this right now it through box breaks. It's probably that way with any products right now.