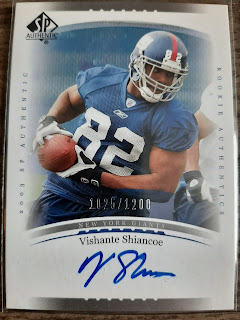 I mentioned a couple of day ago my order with Burbank Sportcards came with some Giants not named Eli and today was the day I planned to show those off.
First we start with my very first Shiancoe autograph. He didn't do much with the Giants as he was Jeremy Shockey's back up but shined more with the Vikings later on.

Only my second Tiki Barber autograph in a Giants uniform comes Illusions. This does mark my first Tiki autograph jersey card though. I think the design and layout on this card is well done.
Tiki was a stud running back for the Gmen, just wished he could had won a Super Bowl. 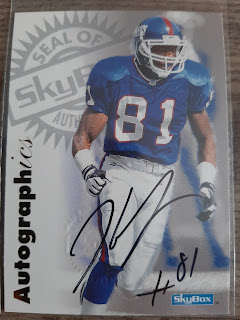 90's autograph and a Giants player, sign me up. Lewis was a first round draft pick of the Giants in 1994 but I don't think he ever lived up to expectations after a successful college career. 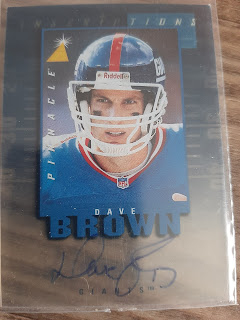 My final autograph snag was this Dave Brown from Inscriptions. Brown doesn't have many autographs out there, I mean why would he looking back on his career, but he was a Giant and I grew up watching him play so I needed one of him. I already had this card but my autograph wasn't as strong as this one as mine had started to fade some. I hope to protect this one better but these acetate autographs can be scary over time.
My next mail day from Burbank Sportscards Beckett Marketplace  will most likely be more Giants pickups because I save 10% by using code 15Burbank at checkout and who doesn't like to save money? I suggest you try it as well.
at March 05, 2021