Elite is one of my early favorites in the football card season. I look forward to its August release every year and this year was no different with this highly touted rookie class. This years Elite returns with some new favorites and old classics as well, what were my pulls and thoughts on this years product, well, only one way to find out, read on!

Before I start my review, here are many places you can find Panini America: Their official site, blog, Twitter, and Facebook. If you don't follow them you should! They interact with you on Twitter, have contests on their blog and Facebook and the site is also fun to visit! 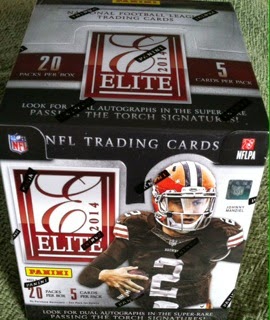 - See more at: http://www.dacardworld.com/sports-cards/2014-panini-elite-football-hobby-box#sthash.rIpKSdxT.dpuf
Each box of 2014 Elite Football should land you three Rookie Cards numbered to 999 or less, one Turn of the Century insert, one Passing the Torch Silver insert and six additional inserts. Not to mention, one Clarity plexiglass insert per box as well.

- See more at: http://www.dacardworld.com/sports-cards/2014-panini-elite-football-hobby-box#sthash.rIpKSdxT.dpufPRICE: You can find most boxes around $60 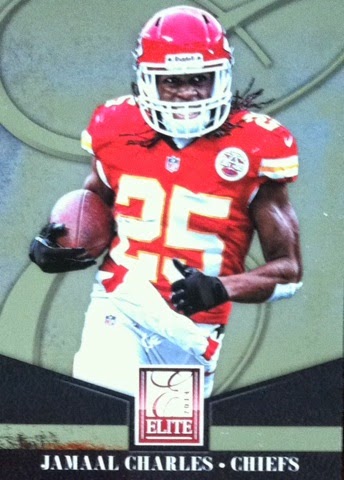 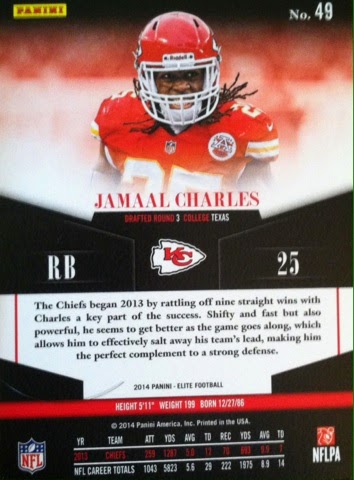 BASE CARDS: Panini changed the look of the Elite base cards this year just slightly. Instead of the usual plain silver foil background, they added the Elite E symbol watermarked into it. I think this improves the appearance of the base cards. Same was done to the rookie cards that are numbered from 999 down depending on the player. You should find three of the numbered rookie cards in every box. 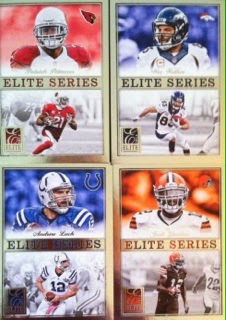 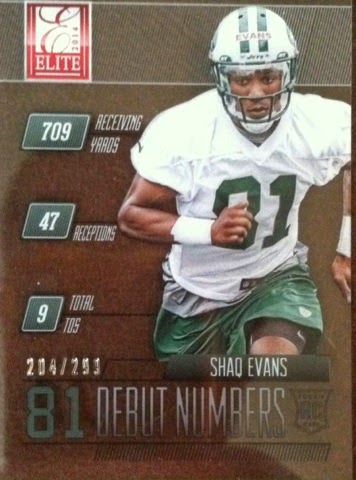 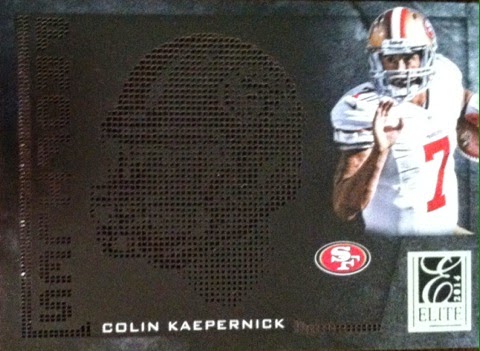 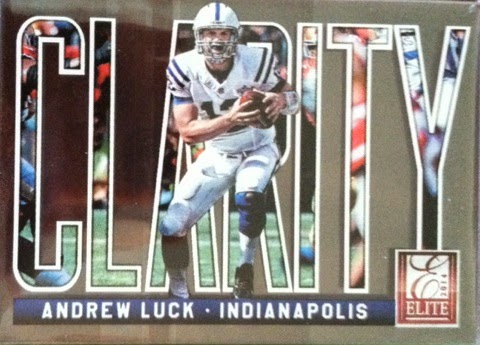 INSERTS:I like the different types and variety of inserts offered in Elite and in the box I opened. You have the return of Elite Series with a great new design, another nice looking insert in Face2Face which matches up rivals, one on offense and one on defense, from their own divisions appearing to clash against each other on the field. You have an insert printed on Acetate in Debut Numbers. Who doesn't like acetate? Then you bring on a unique offering like Profiles printed with a small-hole punch style cutting out the word Profile and the profile of the player. Finally, an insert printed on plexiglass in Clarity. Those bad boys are SUPER THICK and really cool.

Not pictured, for some reason the blog deleted them, is the Turn Of The Century parallel and the Passing The Torch inserts I pulled. Turn Of The Century is one of a few parallels you can find in Elite. Others are die-cut parallels such as Aspirations and Status that also have different colored versions of them. Not to mention there are autographs this way too.

Here is an example I borrowed from Panini's blog to show you what the Turn Of The Century (I pulled Eddie Lacy  numbered to 199) and Passing The Torch (I pulled Randy Moss/Cordarrelle Patterson) inserts look like:

I can honestly say there wasn't one insert pulled in this box that I didn't find worth collecting. Some would make great sets. 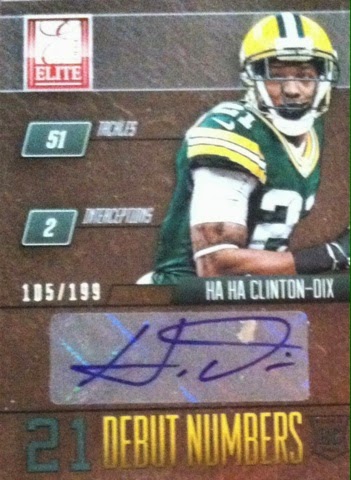 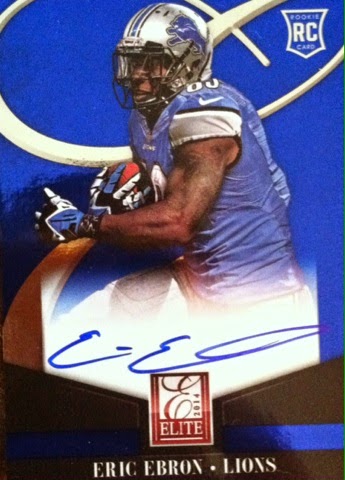 AUTOGRAPHED CARDS:I pulled two autographs, both rookies and every box guarantees one rookie auto per..

One auto is a sticker and one is on-card. But both are top picks, including Ebron who could be a big part of the Lions offense this year. I have always been a fan of acetate autographs, however, I would have rather seen it on-card instead of the base auto. I would have switched the sticker and on-card here.

Elite also has other autographed offerings such as the great Passing The Torch autos that is double-sided matching up players with equal talents and Rookie Inscriptions which is another acetate auto offering of the 2014 rookie class. 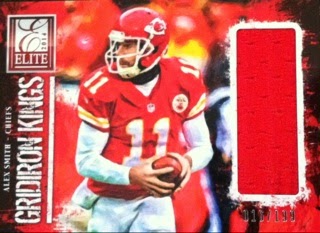 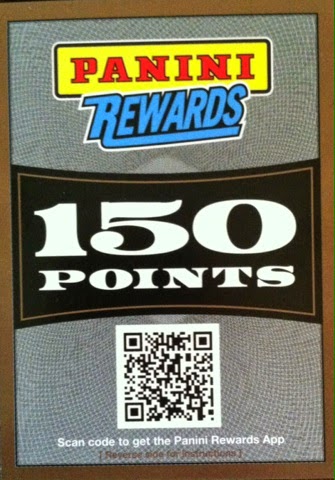 MEMORABILIA CARDS: Got my first Panini Rewards which I placed under memorabilia since most of the options on these "redemption" cards are for them. Mine is also one of the lower end points.

I do like the design and swatch size of the memorabilia card I did land in Gridiron Kings.

Some other memorabilia offerings in Elite are New Breed, Sophomore Swatches and the can be rare Down And Distance.

OVERALL THOUGHTS: There are some fun offerings in Elite. I am a little concerned in terms of return value on Elite as I have seen some rough breaks and for $100 you hope for a decent return. I know my wasn't the best, but in this hobby it is all about risk.

There are some great things to be pulled in Elite and the inserts are quite impressive in person. The parallels are also something that are very popular among collectors. So if you don't have a problem with taking a tiny risk, I say give Elite a try.
Each Box contains Four Autographs or Memorabilia Cards, Three Rookies Card #'d to 999 or less, One Turn of the Century, One Passing the Torch Silver, One Clarity (Plexi-Glass Card), and Six additional inserts! - See more at: http://www.dacardworld.com/sports-cards/2014-panini-elite-football-hobby-box#sthash.WcrZTaV2.dpuf
at August 17, 2014