Score has always been my go-to just for fun cheap break. Not to mention, this years product I have bought a decent handful of and trying to fill in the some set gap needs. For me, it's easier and more fun doing it through busting packs. Probably not the cheapest way but, sometimes the itch is there to open and with the decent price and amount of cards, I just do it.

Base card Sp of Lesean McCoy. It's also the gold version. 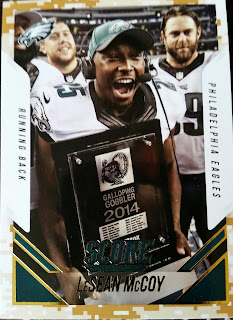 My other photo variation from the box. Non-paralleled. 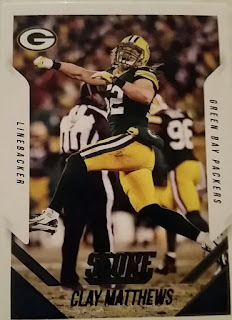 I don't think I have pulled one of these yet from Score 2015 til now. Cool design and theme. I am not a Patriots fan or one of Vinatieri, but I like the card none-the-less. 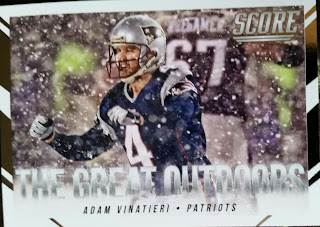 And my hit from the box. First time I have pulled an auto from 2015. It's also a Showcase parallel numbered to 99. Not bad either to find Dorsett who could have a breakout year with the Colts next season. I plan on holding onto this being my first Dorsett auto pull. 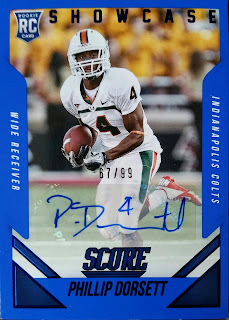 Overall, not bad at all. I also added 22 cards to my set (which I posted about in my handwritten post) and pulled a nice autograph. I also landed tons of inserts which didn't help any of my insert sets but I may use in a future giveaway on here.

What are your thoughts on busting boxes to fill set needs? Do you prefer singles? Or if the boxes are cheap enough do you go this route?
at April 18, 2016