Today's match up was a simple one for me. Some of you may agree, some may not.

It was such a long list I had a hard time picking a match up to use for this segment. So what I ended up doing is randomly grabbing two cards from my Padres pile to use today. I could have easily done a Uniform vs vs vs vs vs vs as you see above, but decided two was enough. So I have one from 1994 and one from 2012.

Up first, the 1994 that they wore from 1992-2000. I think the uniform, despite being basic, is one I mostly associate with the Padres as it's the one saw the most in my prime of watching tons of baseball. So simply put, I would choose this as the winner just because of that. I also like the pinstripes (must be the Yankee fan in me) that were used. Something now they seemed to be completely away from. 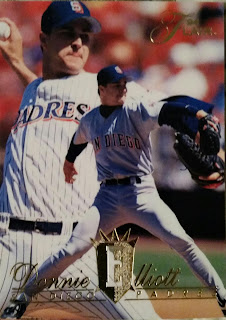 It's wasn't that I hated this design as it fits with today's times and it was one they wore for a long time til this year, 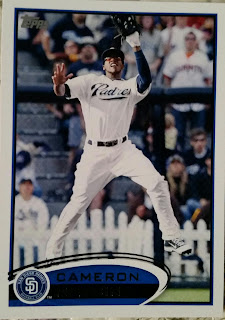 But, I just give edge to the one I have seen them in the most.

Since this is a card blog and card segment, when it comes to cardboard for these uniforms, I would say base card wise, that the new jerseys look better, but when it comes to memorabilia, there is no denying that fans including myself would rather see pinstripes and some color on their jersey cards.

Now I gotta pose this question to the readers and Padre fanatics, which of these two jerseys would you choose and the even tougher question, which jersey OVERALL do you prefer?
Let me know in comments and why!
at April 19, 2016