In this new segment, I thought to go along with my Rodney Hampton posts on Sundays, that I would also take apart my Griffey collection (my biggest PC) and get some of my favorite cards from that PC posted up too.

Up first, this has gotta be one of my favorite base cards. The 1995 Collectors Choice. I must also say thank you the biggest Griffey collector I know for this addition a few months ago, The Junior Junkie.

First off, no border full color photography and Upper Deck at its best. Secondly, that is one lucky lady sitting there. She was the winner of the 1994 "You Crash The Game" contest where she not only got to meet Ken Griffey Jr. but also got to be on his base cards with him. If you look closely she is wearing a very "classic" Upper Deck hat and shirt. 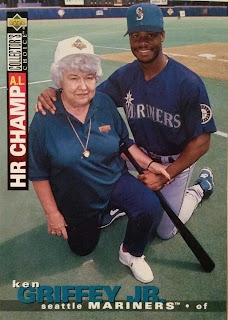 The closest I ever got to Griffey, was back in 1998 when the Red Sox played the Mariners. I had the opportunity of going to the game and even though my seats weren't the best (I was in right field), I still got to see my childhood idol play. On that day he went 1-3, 2 walks and the one hit which was a double that hit the wall near me. The Mariners dominated for most of the game leading 7-2 in the 9th only to lose it by giving up 7 runs in that final inning that included a monster game winning Grand Slam HR by Mo Vaughn.

I was also lucky that day too because Randy Johnson was on the mound so I got to see two Hall Of Famers on the field. Let me tell you what, if you haven't ever seen that guy in person, just picture the Green Giant with long hair. Holy moly, he was tall!

Anyways, back to the cardboard.

The back of the card is a great example of how a base card back should be done. Well balanced with player name, photo, stats, and write up. This was a great year design on Colletors Choice as a whole. 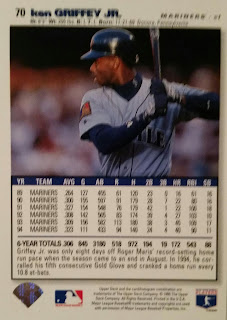