If you collect cards, more than likely you were a fan of Stadium Club.

I like the fact that Topps has made an effort and brought back this product, but it's nowhere near what it once was in the 90's. Not many products are. 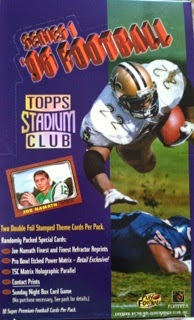 In every box of 1996 Stadium Club football, there are 24 packs per box and 10 cards per pack. There were multiple fun inserts to be had including Joe Namath reprints.

The base cards are the typical run for Stadium Club, clear full color action shots. No borders and just plain showcasing the game. 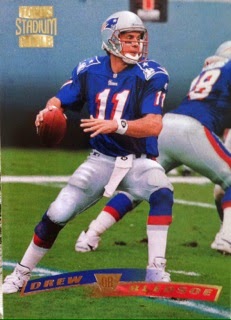 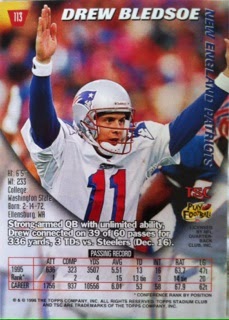 Rookie card photos appear to had been taken at the rookie premier.  I loaded up on some of the greats in this box. 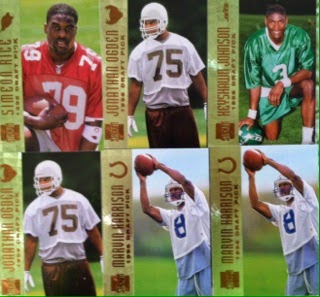 For the shiny fan in us, there were also a couple of subsets highlighting golden moments or milestones reached by players. You will find two of there per pack.

Contact Prints fall at a rate of 1:12. Kinda cool design 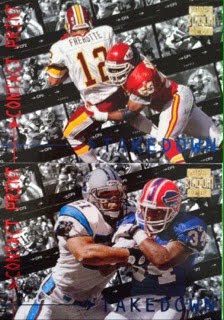 In these boxes you can find Joe Namath Finest reprints. Mine came with only one which is right for a box and rate of 1:24. 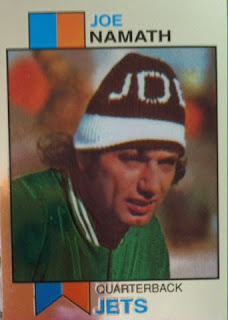 Pro Bowl inserts are a nice pull at 1:36. Look great too! 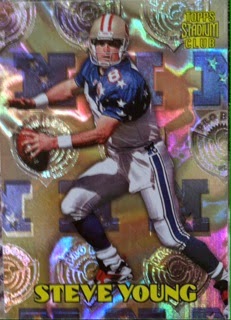 And my favorite insert from Stadium Club, Dot Matrix parallel falls 1:12. These look so cool! I tried my best to capture them in the light.

Overall, I felt pretty good about this break. Fun inserts, key rookies and for the price I paid, there was lots of value.

Now for the breakdown. I took the inserts, star players from the base and rookies and got a rough Beckett Book Value for it:

Seems I made out pretty well. I could have done a bit better unless I missed something. But, can't argue with the results especially with nice base cards and shiny inserts.
at August 24, 2015