As football season finally begins tonight (YAAAASSSS!!) in Canton between the Steelers and Vikings for preseason , well technically football is a year-round sport for me, I forgot to put up a post at the end of last football season giving you guys the results on my first fantasy football season in over 10 years. It was also only my second time playing it. My first and only other time I was champion.

In 2014, I was given an invitation to play fantasy football by my friend over at Jammin JDcards. Not having played in years, I had no idea what I was doing or how to even play. Luckily Jammin showed me how to get set up and how to use the ESPN site for it.

After the draft, I was confident I had a great team, however the start of my season said otherwise, as I fell to 1-3 right out of the gate. I was extremely disappointed and did some serious tweaking of my roster releasing everyone except Peyton Manning, Rueben Randle and JJ Watt. What I didn't know is that it was my best move to ditch them as I picked up players such as CJ Anderson, Mike Evans and the man Odell Beckham Jr who were just floating out on Free Agency.

My roster after those moves and for the rest of the year(other than a few minor changes) looked like this: 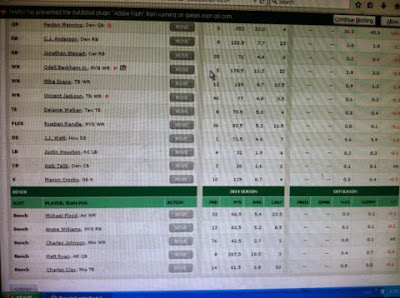 With this newly revamped roster, my season completely turned around and I went on a winning streak into the playoffs. However, I was not top seed as I finished my season at .500, 7-7, and snuck my way in. I had to play both top seeds in my division just to get to the championship game. Both of those teams had destroyed me the first time around. Of course I had to get by the third best team first.

But, just like the Giants the past two Super Bowls they won, I went in with confidence and succeeded in taking down the top three seeds in the playoffs on my way to the Championship where I would face another team I lost to in the regular season that was playing lights out in the playoffs. 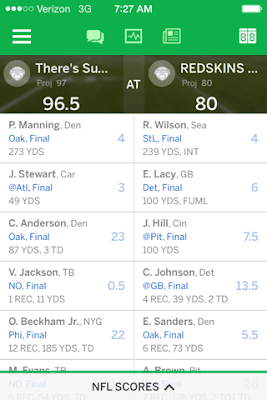 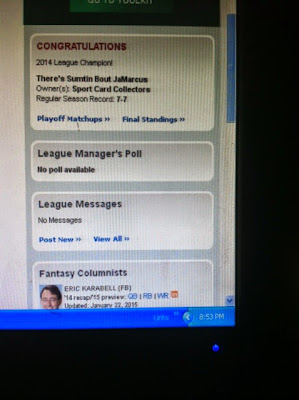 I am hoping that another season of Fantasy will happen again with Jammin JDcards as I had a great time last year. Not to mention, I would love to have a chance to win again.. But, as we all know about the NFL, it's hard to repeat.
at August 09, 2015