I get to give one of my favorite early season releases a second go, let's see if I was as impressed the second time with Prestige.

Before I continue on, I must thank Panini America for the review box and you can look for some of these cards in a future giveaway. Please take a minute out to thank them as well.

Now onto the review. 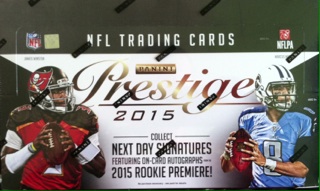 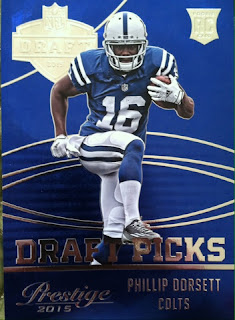 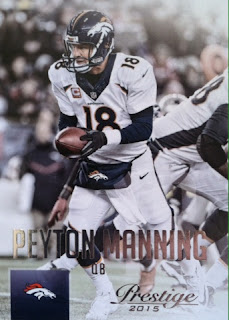 You will find one rookie card per pack. Unless you pull a variation, then you will get two. Variations this year are an improvement as well and I like how Panini did them. Instead of the usual left pose or right pose or draft day photos, these are easy to define. The rookie cards are college unis and the Sp variations have them in their NFL uni's. The variations on the other hand are much easier to pull as well falling at a rate of 1:6.

SP'S AND VARIATIONS:
I should have put the rookies Sp's here lol.
INSERTS:
I pulled four Extra Point parallels including a Brandon Oliver numbered to 50. There is Red, Purple, Gold, Platinum and Black offerings. 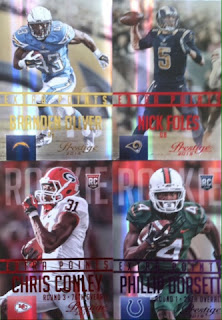 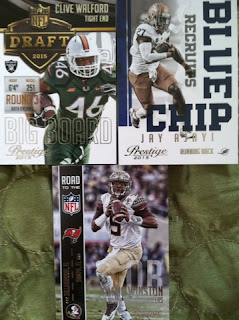 There is also a nice mix of inserts. Some on cardboard. Some on acetate and some with etching. Makes the break more interesting then seeing the same ole, same ole. 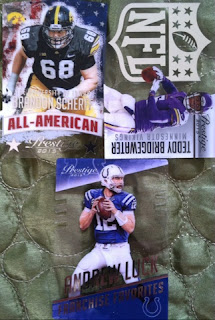 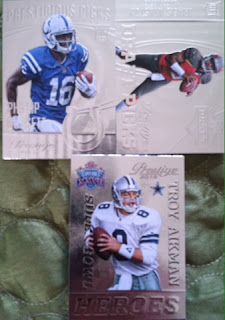 MEMORABILIA CARDS:
In every box you are guaranteed one patch card. They are really sharp and the swatches look nice. I actually pulled a parallel this time.I would assume these patch cards have the same parallels as the base cards. 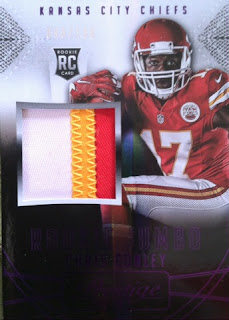 AUTOGRAPHED CARDS:
Three autographs per box. This time in my break, I landed two on-card ones that got signed at the premier.

My other autograph in the box. POOR, POOR AUTOGRAPH.  I could sign for him. 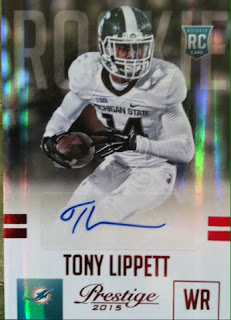 OVERALL THOUGHTS:
Another decent break. Not a strong one in terms of big names, but this is still early so anyone could step up and be big time. I was a bit surprised to pull Lockett again as I pulled him in my first box but as an extra points autograph in that one.

If you have been a fan of Prestige over the years, you will enjoy this product. Big hit seekers, probably not as much even though there are some good hits that can be found in here.

In the end, I like the new additions and new fixes in the product and probably one of the better Prestige releases to date.
at August 26, 2015