Recently I have had some amazing mail days through trades and it has actually put me a bit behind on posting them with other posts already scheduled to go. So, yes, I know I have the rest of my 90's Niche Football Card Blog mailings to show off, but I already have those to post next week. But, this trade mail day I have been sitting on a few days trying to figure out when to post it. Well, I am posting it now.

So, for the fourth time, I pulled off yet another trade with Jaybarkerfans Junk blog. He has been one great trader and has some nice stuff to trade. Others may not consider these nice, but in my world, they are. Sometimes it's simply not about the player on the card, it's about the card itself.

Before I continue on with this post, in case you missed my first three epic trades with him, here they are:

NETted Some Goods:Trade With JBF Blog

This trade brought in all kinds of fun.

First up, one for the Yanks PC, a UD blue-striped jersey card of Jason Giambi. 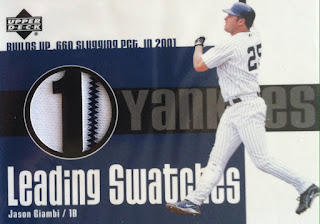 Up next, one of the 90's PC. A Champ Bailey rookie Edge 1st Place Game Gear 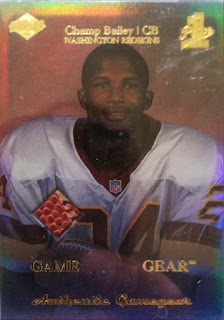 Then we move on to this nice looking Thurman Thomas Classic Pigskin card. I didn't have any memorabilia of Thomas and since the game and football swatch featured on the card is a Giants winning Super Bowl game, it's a bonus :) 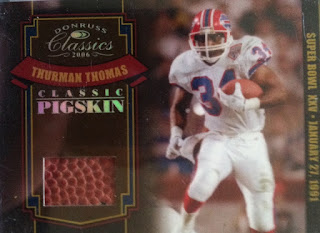 Facemask! Whatever happened to creativity like this? So many plain white swatches, not enough of this: 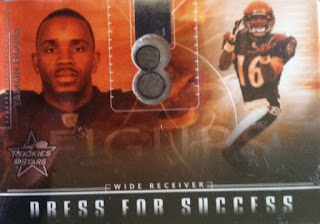 Speaking of creativity, look how sharp this card is! This is by far one of my favorite Freshman Fabric designs of all-time. This card is just beautiful in terms of color, then you look at the nice swatch of football and it just adds another dimension to it. 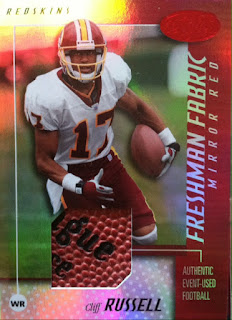 Finally, we end this mail day with a fellow collector....yes...Rob Schneider! I have been told he collects as well. I have always been a big fan of his movies so this was a no-brainer addition for me. 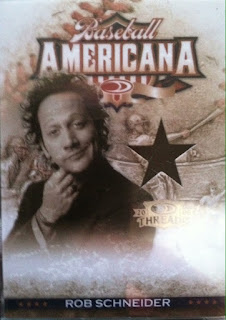 Another trade mail day from JBF in the books. I can't even pick a favorite card from the group as all are impressive in their own way.

Thanks again goes out to JBF for the trade and I hope you enjoy what I have been return mailing as well.
at August 12, 2015